The CSBC drama for Bihar Police Constable Admit Card 2017 continues as it says now that admit card will be available for download after 11 pm tonight.

The CSBC drama for Bihar Police Constable Admit Card 2017 continues as it says now that admit card will be available for download after 11 pm tonight. 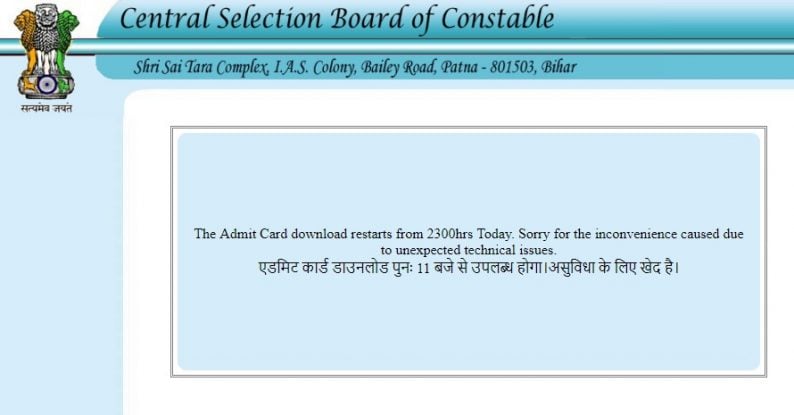 Once, released the admit card will be available for download from CSBC website –csbc.bih.nic.in. According to CSBC, candidates need to download e-Admit card from board website and they need to keep the admit card till the end of entire selection process. CSBC is conducting Bihar Police Constable Recruitment 2017 exam to fill the vacancy of 9900 constable in Bihar Police. Earlier, it has released a notification stating that it will organise Bihar Police Constable 2017 recruitment test in the month of October 2017. The examination is scheduled to be held on October 15 in two shifts—from 10 am to 12 noon and from 2 pm to 4 pm and one more shift is planned on October 22, between 10 am to 12 noon.

The recruitment exam will be held in two phase – written and physical test. All the candidates who passed the first written, will appear for physical test. The final merit list will be created based on the physical test. The written examination is a qualifying examination. The written test will be of multiple choice objective type. 100 questions of 100 marks will have to be solved within 2 hours. The questions will come from subjects like Hindi, English, Math, Social Study (History, Geography and politics) and General Science (Physics, Chemistry and Biology). The paper will be of Class 12th standard. The exam will be conducted in offline mode. All the candidates who successfully clear the written examination will be asked to appear in the physical test. According to CSBC, any candidate who finds any discrepancy in the details of the admit card, they should immediately report the board. So, the error could be rectified on time.

Robotics must be given priority to building a digital economy: Palak

CHSE Odisha Class 12 Arts Result 2021 to be released at orissaresults.nic.in

Robotics must be given priority to building a digital economy: Palak

CHSE Odisha Class 12 Arts Result 2021 to be released at orissaresults.nic.in